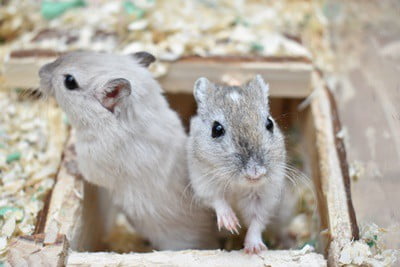 You’ll often find gerbils running around their enclosure. As highly active rodents, they’re always on the go but will also enjoy short bouts of sleep to regain their energy. But have you ever wondered how fast gerbils run?

Researchers have found that gerbils have a maximum sprinting speed of 10.8 km/ph. They also discovered that they have an average speed of around 0.89 km/ph when using their running wheel. Gerbils aren’t the fastest rodents, but they run away to flee from predators, build their nests, and burn their energy, which they have lots of. They also run after other gerbils when they’re playing and fighting.

While gerbils aren’t the fastest small animals, they are very agile and can escape from their owner’s clutches if they’re not watched properly.

How Fast Are Gerbils?

According to the Journal of Experimental Biology, gerbils are slow sprinters. During a study of Mongolian gerbil running performance, gerbils were forced to exercise on a 1.4 meter long, high-speed treadmill for as long as possible while researchers measured their speed.

The study showed that gerbils were relatively slow sprinters, with a maximum sprint speed of 10.8 km/ph (6.7 mph), as we’ve already mentioned. Runs also lasted less than one minute. This was compared to a mean speed of 13.4 km/ph (8.3 mph) of 14 other species of quadrupedal North American rodents.

Researchers also tested the gerbils’ running abilities on a wheel. They found that most didn’t make extensive use of them and ran an average distance of 1.24 km over the course of 83.3 minutes.

To put these speeds into context, these rodents have the following maximum running speeds:

Animal Behavior also explains how gerbils can run up to 5 miles a day in a wheel.

How Do Gerbils Run?

When gerbils run, it appears as if they’re hopping. That’s because they have large back feet. They also have long hind legs in comparison to their forelegs, which never stop growing.

Because their front and back legs are slightly disproportionate, gerbils can sometimes look a bit clumsy when they run.

However, like most four-legged creatures, they run on all fours, occasionally standing up on their hind legs to assess their environment.

When gerbils are in the process of running away from predators, they sometimes stop and put their hands together as if they’re in prayer. This means they’re anxious or on high alert and are watching out for the predator chasing after them.

Why Do Gerbils Run?

Gerbils run because of several different reasons. In most cases, running is a matter of survival. That means gerbils must be quick and agile enough to get away from danger.

However, while wild gerbils have plenty of opportunities to run, pet gerbils don’t unless they’re provided with a large enclosure, a running wheel, and space to stretch their legs outside of their captive habitat. Gerbils run for the following reasons:

In the wild, gerbils are prey animals that have many predators. This includes birds of prey, snakes, and wildcats. This means they need to run away from danger, fleeing to the safety of their burrows.

Not only do they need to make a speedy getaway, but they need to change their direction and sprint at their maximum speed to escape the clutches of their larger, faster predators.

Because of these instincts, captive gerbils will also run if they feel they’re in danger from people or other pets in the home.

Gerbils naturally dig extensive burrows deep underground. These tunnels consist of food and nest chambers that can go as deep as 170 cm. They can also extend horizontally over 6-8 meters.

As a result, wild gerbils spend most of their days running in and out of these tunnels, gathering nesting materials to build more tunnels.

They do the same in captivity, but they have less space to run about in, and their burrows are much smaller. As a result, captive gerbils tend to be slower-paced.

Play with Other Gerbils

Gerbils run after each other to bond and play. Gerbils prefer to live in pairs as they enjoy the social interaction that comes from living with a friend. You’ll know when gerbils are playing because they’ll also jump around, wrestle, and box each other with their paws.

While it may sometimes look like the gerbils are fighting, playful chasing is slow and non-aggressive. Similarly, they’ll also take turns chasing each other – almost as if they’re playing the game “Tag.”

Fight with Other Gerbils

On the other hand, if one gerbil always chases the other and never the other way around, they’re likely fighting. The aggressive gerbil will run fast to catch up to its subordinate tankmate, striking at the gerbil’s rear end each time it gets near.

It’ll also have puffed-up fur and an arched back. This behavior may also be accompanied by loud vocalizations, such as teeth chattering and squealing. This is unusual, as gerbils are usually quiet.

Gerbils have lots of energy that they need to burn each day. They’re highly active throughout the day, burrowing, building tunnels, and running about in their enclosure.

Gerbils sleep for around 1 to 4 hours in each go. Once they wake, they’ll exhibit a burst of intense activity, such as running on their wheel. They rarely ever sit still, except to sleep.

If gerbils aren’t given enough space or opportunity to burn their energy by running, they’ll:

Running is an excellent way for gerbils to wear themselves out. Similarly, a running wheel provides gerbils with ample opportunity to run as fast as they can, keeping their joints and muscles supple and healthy.

Is Running Good for Gerbils?

As we’ve already mentioned, gerbils need lots of exercise. In the wild, they run long distances to travel around, getting all the exercise they need. If they don’t, they risk gaining weight and becoming dangerously overweight. As a result, gerbils should run for at least 30 minutes every day.

Unfortunately, gerbils can’t run fast enough around their enclosures. Similarly, they don’t need to run away from predators in captivity, so they don’t have the same encouragement as wild gerbils to move.

According to Critical Care, running can help older gerbils recover more quickly from a stroke. It also provides them with the mental stimulation they need to remain happy and healthy.

However, some gerbils are frightened of them, so they will need other opportunities to run. Instead, gerbil-proof your room and allow your pet to run around at its leisure. Gerbils love exploring, jumping, and climbing and will spend plenty of time and effort burning their energy.

Many gerbils get exercise by digging burrows, so they shouldn’t need to run too often to remain fit and healthy.

While gerbils aren’t the fastest, running is an essential part of their survival. That’s why they need plenty of time outside of their enclosure to stop them from feeling stressed and claustrophobic. Coupled with the right running accessories, your gerbil should stay happy and healthy.