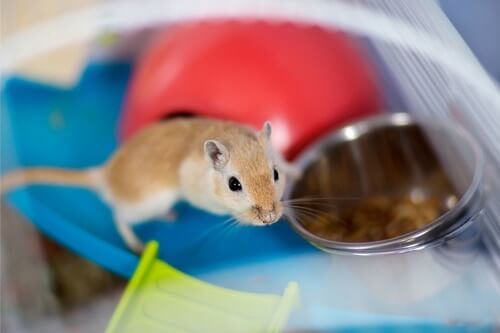 A gerbil’s life can seem a bit dull. Pet owners may think that swimming will be a good source of fun and enrichment. In reality, gerbils don’t have much cause to swim. There’s nowhere to swim in their cages and just as few sources of water in their natural habitat.

Gerbils dislike swimming. They won’t play games in water like other animals, although they can swim in an emergency. There aren’t many streams and lakes in the gerbil’s natural habitat, so they aren’t good swimmers. They use the doggy paddle to swim, and they’ll do anything they can to get out of the water.

You can still bathe your gerbil in water. If you do, ensure that the water isn’t too deep. Your gerbil should be able to touch its feet comfortably on the bottom of the bowl. However, it’s recommended that you give your gerbil a sand bath rather than a water bath. Gerbils bathe in dust in the wild.

Gerbils, like all rodents, can swim. Almost all mammals have an innate ability to swim when placed in water. The point is so that they can survive better in the wild.

Gerbils swim in a particular way. Humans swim in many different ways, e.g., backstroke or breaststroke. However, animals swim the ‘doggy paddle’ way. This is where:

Because gerbils only have small paws, this method of swimming isn’t effective. The bigger the paws, the more purchase an animal can get in the water. It’s the difference between swimming by kicking your feet or by using flippers.

So, while your pet can survive in water and stay afloat until it comes to land again, gerbils aren’t good at swimming.

Do Gerbils Swim in The Wild?

Gerbils can swim in the wild if they encounter water. But you will hardly ever see one swimming in nature. According to World Travel Guide, there is little water in the gerbil’s natural habitat.

Mongolian gerbils live in an environment that is dry and arid. Most of the country is covered by the steppe. This is a kind of grassland with almost no trees, water, and lots of shrubs and grass.

Because there’s almost no water, gerbils rarely encounter it. Any bodies of water they do encounter are small. That’s not to say that there aren’t any rivers in Mongolia, but there are fewer than in other places, and there are particularly few in the steppe.

Moreover, Mongolia is a cold country. In the winter, smaller streams will entirely freeze. All bigger rivers will have at least a layer of ice that covers the top. This again limits the opportunity or need for gerbils to swim.

Other species of gerbil live in other places, like in North Africa. Much of North Africa is covered by the Sahara Desert, and even places that aren’t are still quite dry.

Also, gerbils don’t necessarily need to cross bodies of water, even where there are some nearby. That’s because gerbils stick closely to their home ranges, which are around their burrows. There’s not frequent need to head off and explore. So, while gerbils can swim in the wild, they rarely do.

Do Gerbils Swim in Captivity?

Captive gerbils can swim the same as wild gerbils can. This instinct is inbuilt and hasn’t been erased through being in captivity. Besides, gerbils have only been in captivity for a few decades, which isn’t long enough to overcome instinct in an animal.

But as you’ll know, gerbils don’t have any need to swim in captivity either. In a gerbil’s enclosure, there’s nothing for them to swim in. They have a water bottle or a small water bowl, but a gerbil can’t swim in either of these.

You may occasionally bathe your gerbil in water, in which case you’ll know they can survive that. A gerbil in a water bowl may or may not swim, depending on how deep the water is. If it’s too deep for your pet to stand in, it will have to swim.

However, this isn’t the ideal way to bathe a gerbil anyway. So, with good care, your captive gerbil will never need to swim.

All mammals can drown if they encounter water they can’t get out of, and that includes gerbils. Drowning occurs when an animal is in water it can’t swim out of. So, for example, it could be in the middle of a large body of water or a flood.

There aren’t many circumstances where this might apply to gerbils, either in the wild or in captivity. In the wild, there are no huge bodies of water that gerbils encounter and need to cross. They will, instead, stay on land.

In captivity, the only way a gerbil could drown is if you’re bathing it and you leave it unattended. If the water is too deep for your gerbil to stand, it could potentially drown even on its hind legs.

Your pet would try to escape from the bath before this occurred, though. If you’re bathing it in a bowl, it could hold onto the edge of the bowl and perhaps even tip it over. If you bathe your gerbil in a small bowl with only a little water and don’t leave it unattended, there’s no chance of drowning.

Having the ability to swim is something different from enjoying going for a swim. With other pets, their enjoyment while swimming is obvious (e.g., when playing fetch). But gerbils are different.

This is partly because gerbils aren’t good swimmers. Other pets can swim well, so they can enjoy playing games like fetch without thinking about their swimming at all. But this doesn’t apply to gerbils, so their experience can seem less enjoyable and more stressful.

Gerbils seem aware of the fact that they can’t swim well. You can see this in action by watching your pet while it swims. When it does, it will consistently attempt to find its way out of the water. It will search for somewhere it can safely stand instead.

This indicates that your pet isn’t comfortable swimming. It would rather get out than carry on. This makes sense from an evolutionary perspective.

Gerbils also only swim when they have to, rather than as part of a game. There haven’t been documented cases of gerbils playing fetch in the water or playing fetch at all. While gerbils are clever and could potentially learn, there aren’t any known cases yet.

You can safely say, then, that gerbils don’t enjoy swimming like other pets do.

There is no definitive answer as to whether a gerbil can ever enjoy swimming. But what has been tested is whether gerbils become unhappy from swimming too much. There is a test called the ‘forced swim test,’ or FST, which involves a lot of swimming.

According to Scientific American, the purpose of the test is to induce depression in a lab animal. This is undoubtedly a cruel thing to do, although scientists might say that it’s justified to study depression. But either way, many FST tests have been performed on gerbils.

What happens is that the gerbil is put into a tank which it can’t feel the bottom of with its feet. It floats in water and has to swim. Scientists administer the lab animal with an anti-depressant drug and check how long it takes for the animal to become stressed and unhappy.

These forced swim tests don’t prove that gerbils hate swimming. They show that a gerbil that can’t make its way back to ‘dry land’ will eventually become stressed and unhappy. But even so, gerbils don’t like swimming in the way that some other pets do.

The reason is that gerbils hardly ever encounter water in the wild. They don’t use their instinctual abilities as often as other animals. This means they aren’t good swimmers.

If you’re not a good swimmer, you’ll know how unpleasant it is to be in the water and feel uncomfortable because you can’t swim well. The same applies to animals. This is driven by fear.

Fear is one of the earliest and simplest ‘emotions’ that animals can feel. Like pain, it drives an animal to do something. Because gerbils aren’t good swimmers, they’ll be fearful, encouraging them to get back to dry land.

That doesn’t mean that all gerbils are the same. Yours may be more comfortable when swimming than others are. However, it is something that applies to most gerbils, if not all.

You can bathe gerbils in water, but a sand bath is recommended. Most of the time, your pet will keep itself clean through grooming. Like other pets, it uses its tongue and teeth to clean its fur. Gerbils will also groom one another in hard-to-reach places, like the back of the head.

However, it can be a good idea to bathe your gerbil occasionally. A good example is when your gerbil has fleas or mites in its fur. When this happens, the best way to get rid of them is with an anti-parasite shampoo. This contains chemicals that kill parasites.

According to Parasitology Research, you can also get anti-mite liquids that aren’t shampoos but are rinsed off with water. These haven’t been tested on gerbils/rodents but are another example of getting rid of mites with bathing.

When bathing a gerbil, you don’t want it to sit in too much water. You want your pet to be comfortable so that it can easily raise its head above water. This means it won’t be swimming much anyway. Gerbils don’t mind baths like these.

If you were to fill the gerbil’s bath until it couldn’t stand, your pet would swim and try to get out. But if it can safely stand, then it won’t bother swimming. And either way, gerbils prefer sand baths.

How Do Gerbils Bathe?

A sand bath is exactly what it sounds like. Instead of your pet standing in water, it stands in the sand. It rolls around to get the sand in its fur.

The point is for the sand to absorb all the oils and grease in your pet’s fur. Your gerbil can comfortably roll around on its back without fear of drowning like it would in water. Plus, sand is surprisingly effective at capturing grease, fleas, and mites from your pet’s fur.

Also, using sand is natural compared to water. Sand can be found in your gerbil’s natural habitat in Mongolia. There, a gerbil will bathe itself in dust rather than sand because it’s more common.