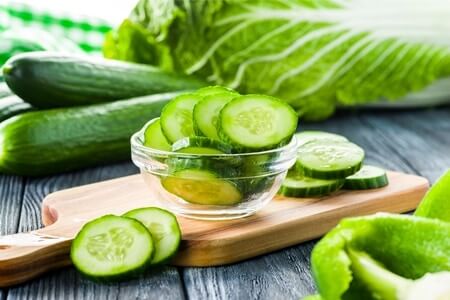 Your gerbil’s diet is the cornerstone of its health. So, you may think that cucumber is a healthy vegetable to feed your pet gerbil.

Cucumber is good for gerbils. It contains the right amounts of fat, protein, and carbohydrate. However, with a 95% water content, it’s too watery to be a regular food. Too much will give your gerbil diarrhea. Cucumber should be served as an occasional snack in small amounts.

If you fed your gerbil nothing but cucumber, it would become sick. That’s because it lacks key vitamins and minerals, e.g. magnesium. Without magnesium, your gerbil’s brain health will deteriorate.

Cucumber is a classic food fed to rodent pets and similar. It’s a kind of culinary vegetable, but is scientifically correctly termed a fruit. It’s thought of as healthy because it’s low in calories and contains practically no fat.

Gerbils are allowed to eat cucumber, but shouldn’t eat too much because of its high water content. If your pet eats too much, it could have adverse side effects. But in small amounts, cucumber is a safe and healthy option.

According to Berkeley Wellness, there are many different types of cucumber. But all of them are good choices for gerbils.

Are Gerbils Allergic to Cucumber?

Cucumbers are a common vegetable and can be found in every grocery store. But they aren’t common where the gerbil lives in the wild.

Wild gerbils live in deserts and dry grasslands. The most common pet gerbil is the Mongolian gerbil, which lives in the Mongolian steppe. This is a large, wide-open grassland with sandy soil and almost no rain.

This may lead you to believe that gerbils are allergic to cucumber, or would get sick if they eat it. That’s not true. Gerbils can eat cucumber safely and will have no allergic reaction to it.

What you may notice is if your gerbil has diarrhea after it eats cucumber. This would look like diarrhea caused by any other health condition. This may lead you to believe that your gerbil is allergic, even if others aren’t.

If your gerbil eats too much cucumber, it will ingest too much water. This causes loose stools, i.e. diarrhea. If you notice this issue, feed your pet less cucumber in the future.

Gerbils enjoy eating vegetables. There are several reasons why:

The skin of a cucumber can be tough depending on the kind you buy. Gerbils enjoy tough foods they have to chew through.

Your gerbil will certainly eat cucumber if you offer it some. If it’s diced, they will quickly realize that it’s food.

However, that doesn’t mean that you should feed your gerbil cucumber all the time. Gerbils like sunflower seeds, but if they ate as many as they wanted, they would quickly become obese. It’s your job as the owner to offer a balanced diet.

Raw cucumber is OK for gerbils to eat. It doesn’t contain any proteins or plant compounds that need to be cooked to be made safe.

Furthermore, gerbils prefer eating raw food. All the food they eat in the wild is raw. Only people eat cooked food as a rule, apart from animals which live in cities too. Cooking food can also destroy nutrients, depending on how it’s done (e.g. boiling).

The only issue is digestibility. It’s thought that the seeds in cucumber, raw or otherwise, can give you gas. That’s because they’re fibrous, which most vegetables are. However, this won’t be a problem for your gerbil because it should only eat small amounts.

You can get baked or fried cucumber. Again, these are fine for your pet to eat. The only issue is that the nutritional values of the cucumber may have changed, e.g. if it was cooked in oil. So, check the ingredients or avoid cooking it in oil to maintain the nutritional benefits.

You should also avoid feeding your gerbil any seasoned foods. Seasonings can contain lots of salt, too much of which is bad for your pet. Again, check the ingredients and find the nutritional information of any foods you buy before feeding them to your pet.

Health Benefits of Cucumber for Gerbils

Cucumbers are a healthy food. People eat them frequently as part of weight-loss diets, because they’re so high in water and have hardly any calories. That doesn’t make them a healthy choice as the majority of your diet, though, because you need calories for energy to live.

But aside from that, cucumbers do have several benefits, explained in the table below:

These points mean that cucumber is an excellent snack. It dovetails nicely with the rest of your gerbil’s diet, and shouldn’t cause major deficiencies.

Food contains three kinds of energy: carbohydrates, proteins, and fats. Different foods have different proportions of these three key macronutrients. Correspondingly, each animal needs certain amounts of each so that it can thrive.

If you get the proportion wrong, your pet gerbil can become sick. But cucumbers contain roughly the right amount of each nutrient for pet gerbils. The only thing they have too much of is water.

Here’s a table with data from Nutrition Value, explaining how much of each cucumbers have:

What this indicates is that cucumbers make an excellent health food. They contain 95g of water for every 100g of cucumber. So, if you eat them, you feel full even though you’re hardly eating any calories.

That doesn’t make cucumbers a good choice as a key part of your gerbil’s diet, though. Your gerbil likely doesn’t need to lose weight. Instead, it needs foods that will provide enough energy for the whole day.

But what this does mean is that cucumbers are a suitable snack. They aren’t going to make your gerbil fat, or give it diabetes from too much sugar.

Vitamins and Minerals in Cucumber

The only issue with cucumber is that it doesn’t contain many vitamins and minerals. Being mostly water, there’s little room for anything else. Here are all the micronutrients cucumber contains in large amounts:

Aside from that, cucumber contains trace amounts of:

What this means is that cucumber has a wide variety of micronutrients, but not much of each of them. Your pet would have to eat lots of cucumber to get the vitamins and minerals it needs. This isn’t possible because they contain too much water.

Magnesium is a particular issue. According to the NAP, gerbils need it to promote brain health. If they don’t have enough, seizures become much more likely. Your pet would need to get its vitamins and minerals from somewhere else.

If you want to feed your pet snacks, then cucumber is a good choice. Other snacks have far too much fat, like sunflower seeds, for example. Cucumber has the right proportions of carbohydrate, fat, and protein which makes them more suitable.

However, that doesn’t mean you should, or that you need, to feed your pet cucumber. There’s no need to give your pet snacks because it won’t get bored with its food. Gerbils aren’t like people in that way.

Instead, you can feed your pet gerbil food mix every day of its life with no ill effects. It contains every macronutrient and micronutrient that your gerbil needs. It also has the right amount of crunchy seeds, which are good for your gerbil’s teeth, too.

To feed your gerbil too many snacks would make it miss out on these nutrients from its food mix. Its belly would be full of cucumber, which doesn’t have every necessary vitamin and mineral. So, only small amounts of cucumber as a snack are needed.