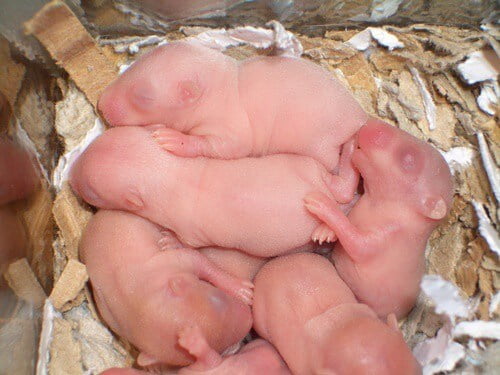 Gerbils and other rodents are known for eating their young. This grisly behavior is difficult to understand, but there are good reasons why it happens.

The mother may be starving after a long illness during pregnancy. Or, because it has too many young, or another litter coming. The pup itself may be a runt, or it could have become ill and lost lots of weight.

You can’t stop gerbils from attacking and eating their young. The reasons they do so are instinctual. However, a gerbil parent will never kill all of its young.

Why Do Gerbils Eat Their Young?

The drive for a gerbil to eat its baby is evolutionary. The reasons are to do with the nutrition of the mother and the rest of the litter.

By killing one or two pups, the mother ensures that both the parents and the rest of the litter can survive. What you’ll rarely see is a mother killing her young for no reason.

It’s also possible for the father to attack and kill his babies. Or, the perpetrator may have been neither the mother nor father but another gerbil housed in the same group.

If a Gerbil’s Litter Is Very Large

Gerbils may eat their young if they have too many. Gerbil litters are usually between two and six young. However, a mother can give birth to more young than it can in one go. While the record for the biggest litter is unknown, more is possible.

When this occurs, the mother and father can’t look after all the young. It’s too much responsibility because the parents don’t have time to watch over them all. The parents need time to groom and feed themselves, too.

The parents will, instead, make the litter more manageable by killing one or two. This means that the mother can safely feed her remaining babies more easily.

If a Gerbil Has Too Many Litters

When a mother gerbil has a litter, one of the first things it does is mate again. It can then give birth to another litter around the time that the first litter is weaned. This means that the mother can continually produce more young, with no time wasted.

The gerbil mother can do this two, even three times, or more. This is the optimal way for small creatures in the wild to breed because it produces so many offspring. Small mammals are so easily predated that many young are needed to create the next viable generation.

However, it’s possible that the female can give birth to a new litter before it’s supposed to. The mother can delay birth for some time, but sometimes not long enough.

If this happens, the mother will have far too many pups to feed. Instead, it will kill off some of the second litter so that the rest of both litters can survive.

When the mother gives birth, she builds a nest. It takes the young to this nest and spends the next week or so holed inside. During this time, she will feed her young with milk. Neither young nor mother will venture from the nest for this week.

This places a great strain on the mother. She can’t eat during this time because she’s so busy looking after her pups. But in addition, it must use extra energy to create lots of milk for each pup. This comes after the pregnancy process, which uses lots of energy too.

In the wild, this can place the mother in an untenable situation. She won’t have the energy reserves to last until the pups are weaned. This could place her close to starvation. Eating one or two of the pups, especially in a large litter, means that the mother and the rest of the pups can survive.

In a gerbil litter, there is often one baby that is less well developed than the others. This is a simple fact of nature, and the reasons why it happens aren’t clear. But when one baby is born smaller than the rest, it will grow to be smaller, too.

That’s because the other babies in the litter can bully it. They can take its food and deprive it of access to its mother. This is sad for the owner, but all gerbils (and animals) are driven by eating and keeping resources for themselves.

Any milk or attention given to the smallest (or the ‘runt’) is wasted when this happens. The runt will likely grow up to be too weak to survive anyway. The mother’s instinct is to get rid of the runt and focus on the rest of the pups.

This might seem sad, but it makes sense for wild animals. The mother’s job is to have as many healthy young as possible and pass on its genes. If it spends time raising underdeveloped pups, these may never grow into healthy adults. So, it’s better to spend time and resources wisely instead.

Ill Health of Mother During Pregnancy

Pregnancy and taking care of young is stressful enough on your gerbil. Things can get even worse if the mother is ill during this time. If a gerbil is ill, she:

If the gerbils’ mother were ill, she wouldn’t have consumed enough food. This issue is compounded by creating milk and then by the potential second litter on the way.

To make up for that lack of food, the mother may select the weakest of the litter soon after it’s born to eat it.

It’s also possible for a pup to be unwell, even if it was born as strong as it should have been. Many health conditions can affect pups, including respiratory infections, Tyzzer’s disease, diarrhea, and pests such as:

These health conditions can all make a pup’s survival much less likely. When it seems as if the pup isn’t going to get better, the mother may kill it and eat it.

Stress does strange things to animals, including people. It makes animals behave strangely, in ways that may seem irrational or even wrong. It does the same to gerbils and can make them eat their young. Gerbils can be stressed out by:

You can remedy most of these kinds of stress. Do so as soon as you can. The rest of the reasons on this link are all instinctual, so they can’t be helped. But stress you can fix.

Gerbils can fight and kill each other during declanning. Declanning is where the gerbil group, or clan, splits apart. In the wild, one or some of the group would head off to start their own clan. In captivity, that isn’t possible, so declanning causes constant fights.

Gerbils are surprisingly aggressive and can kill each other during these fights. They use their sharp teeth to fight and can ‘box,’ hitting each other with their paws and claws too. Gerbil young are a frequent cause of these fights.

When a rival gerbil sees the breeding pair’s young, it may be jealous. It would rather be the one having young and passing on its genes. So, it may attack the young and kill one or more of them. This is a frequent occurrence in big gerbil groups.

This means it may not have been the mother gerbil that killed its young. According to Hormones and Behavior, it may have been another gerbil in the group. Of course, this doesn’t apply if the young were housed only with the mother and father.

The Pup Is Already Dead

There’s also a chance that the pup may already have been dead. Not all gerbil mothers kill their young to eat them. Sometimes something happens, the pup dies, and then the mother eats it.

If the baby is born dead, then the mother may eat it straight away. This is a frequent occurrence. That’s why gerbil litters are large because some are occasionally stillborn. Having a big litter means that there will still be lots of gerbils growing to adulthood.

Or, if the pup was sick and subsequently died, the mother may eat it once it’s dead.

Do Male Gerbils Eat Their Babies?

However, the father can also kill his own offspring. However, it has a different reason to the mother. The male can sometimes kill its young to put the female back in heat. It can then mate with the female again to produce another litter.

According to the AAAS, the male will have had more young than if it didn’t kill one of them.

Do Gerbils Always Eat Their Young?

According to Acta Veterinaria Scandinavica, rodents are known for eating their young. But a gerbil eating its young is a rare occurrence. It doesn’t happen every time a gerbil gives birth to a litter. It only happens sometimes, in the circumstances described above.

Why Do Gerbils Eat Their Babies after Killing Them?

Most of the reasons are due to the baby not being likely to survive. So, killing it saves resources that can be spread among the stronger, healthier pups. But why, then, does the mother eat its young? Wouldn’t killing the young be enough?

Developing and then rearing pups takes a toll on the mother’s body. The mother can’t eat as much as she would like, and much of the food it does eat is to make up for lost milk. There’s also usually another litter on the way, which the mother will have to care for afterward.

The sad fact is that if the mother didn’t eat the baby once it was dead, something else would. At least by eating the baby, the mother can get more energy to use to create milk. These choices relate mostly to wild gerbils, but this behavior is passed down to captive ones too.

The mother also has to keep the burrow/nest clean. A dead animal will attract flies and vermin/pests. It’s best to keep these away from the other, healthy babies.

A dead pup will also, eventually, turn bad and rot. This introduces bacteria to the nest, which can cause infections in the other pups. So, eating their young can also be an act of cleaning, tidying, and taking advantage of food that would otherwise be wasted.