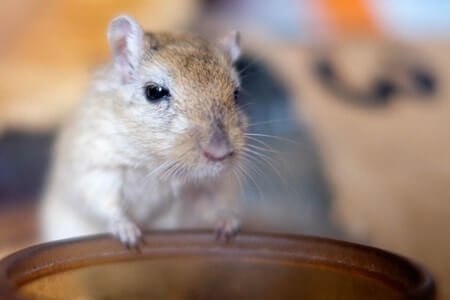 A gerbil’s claws can become too long because they grow continuously throughout their life. If left to grow without intervention, they can curl inwards and cause cuts on your gerbil’s paw pads.

You can cut your gerbil’s nails short with clippers. You’ll need strong claw clippers and heavy gloves. You can also provide toys for your gerbil to scrabble at. This hands-off approach will wear down its nails.

If you don’t trim your gerbil’s claws, they can cut into the paw by curling backwards. If that happens, you’ll need to trim them. Just don’t cut them too short because it’ll hurt and leave your pet without one of its most crucial defenses against predators/other gerbils.

Table of Contents hide
1 Can a Gerbil’s Nails Get Too Long?
1.1 How Long Should Gerbils’ Nails Be?
1.2 Do Long Nails Cause Problems for Gerbils?
2 Keeping Gerbils’ Nails Short: A Step-by-Step Guide
2.1 1/ Purchase Nail Clipping Equipment
2.2 2/ Pick Your Gerbil Up Correctly
2.3 3/ Clip Your Gerbil’s Nails
2.3.1 Does Clipping a Gerbil’s Claws Work?
2.4 4/ Gerbil Toys for Wearing Down Nails
2.4.1 Will Playing with Toys Shorten Your Gerbil’s Claws?
2.5 Related Articles:

Can a Gerbil’s Nails Get Too Long?

This is the same as many pets that can’t keep their claws short in captivity. According to the Kennel Club, other common household pets are affected too. You may wonder why gerbils need to have their claws cut.

In the wild, they get by fine without an owner/vet trimming their claws. A wild gerbil’s claws won’t ever cause it a health issue.

Wild gerbils can keep their claws short easily. They dig through the sandy soil of their environment to create their burrows. They scrabble in the dirt looking for food. This continually keeps a gerbil’s claws short.

But in captivity, a gerbil can’t do these things. It may create a burrow, but the material it burrows in is usually soft and fluffy. The same applies when it’s feeding, especially if you feed your pet from a bowl. Scatter feeding encourages digging, but only in soft substrate.

Besides that, your gerbil cannot move around easily. It’s confined to a small cage, which likely won’t have many things in it. It can’t run or explore like it would in the wild, further limiting the ways it can keep its nails short.

A gerbil’s claws can easily get too long in captivity. It’s your job as your pet’s owner to ensure they don’t stay long.

How Long Should Gerbils’ Nails Be?

A gerbil’s nails vary in length. Of course, when it’s young, its nails are shorter than when it’s old. And if a gerbil is smaller than other gerbils its age, then its nails will be shorter too.

However, the average gerbil’s nails are around ⅕ of an inch. They should be slightly curved like the claws of other household pets.

Your gerbil’s nails may be longer and shorter than this, but that doesn’t matter. What matters is if they curve inwards. So, claws of ⅖ of an inch are fine provided that they don’t curve back inwards and make it hard to walk.

You can tell if they’re too long if they affect your gerbil’s behavior. If your gerbil:

If so, its nails are too long. You must rectify the situation because the nails could cause an open wound. If this becomes infected, it can cause further complications. It could even cause sepsis, which is fatal if untreated.

Do Long Nails Cause Problems for Gerbils?

It may be tempting to leave your gerbil’s nails as they are. And, usually, there’s no problem doing so. A gerbil’s nails won’t cause a problem if they are only long for a short time.

But if they’re long for months, they can cause lots of pain. That’s because of the way the claw grows. Claws grow at a curved angle, because this makes them more useful.

In self-defense, it makes the claws more difficult to pull out. And when digging, they act as a scoop. According to Alternatives for Laboratory Animals, gerbils are frequent diggers, and will dig even if there isn’t anything to dig into.

But if they are left to keep growing, they will grow back in on themselves. They’re the same as an ingrown toenail, which people can need surgery for. This will first make it awkward for your pet to walk, before making it painful for your pet to walk.

Over time, the nail could make a cut in your pet’s paw pad. This could become severe, especially if it gets infected. Your pet walks on its bedding all day, which may have urine or feces on it.

Infections can become septic. Sepsis is where bacteria which infected a wound gets into the bloodstream. From here, it attacks the internal organs. When the organs stop working, your pet will die unless it gets antibiotics.

There are two key ways you can keep your gerbil’s nails short. These are providing a rough surface for your gerbil(s) to walk on, and using clippers to clip them (provided you know how to cut gerbils’ nails).

However, it is also possible to make your pet’s nails too short. If you’ve ever cut your own nails too short, or bite them, you’ll know why. So, clipping requires great care and is best done by a vet, but can be done at home.

You can clip your pet’s nails at home. While doing so can be difficult, it becomes easier the more you do it. But as a beginner, you must learn what you’re doing first. So, follow the step-by-step guide.

Once you have each of these things, you’re ready to start clipping your pet’s nails. Get comfortable with holding the clippers before starting, because they may be an unusual shape, different to your usual nail clippers.

2/ Pick Your Gerbil Up Correctly

When you’re ready, take your pet in your non-dominant hand. Hold it closely but without gripping it tightly. You want it to not wriggle, but holding it too tight will make it want to escape. So, ensure your gerbil is completely comfortable with you before continuing.

Hold the gerbil around its midriff so that its head is free. Holding it here also lets you lift its legs up one by one, for ease of clipping. You may want to practice holding your pet this way before thinking of clipping its nails.

Then, take the clippers in your dominant hand. Clip the nails one by one. Holding your pet around its middle, lift its leg upwards so that you can access it easily. Push its paw from underneath to spread its claws outwards.

Look at each nail as you clip it. Ensure that you don’t clip the nails too short. The quick of the nail will be a different color, like it is on your nails, so avoid clipping them here. Be patient, and if your gerbil squirms a lot, don’t clip its nails by force. It would be likely that you hurt your pet by accident.

Using a file isn’t possible because it would take too long. Your gerbil would be uncomfortable with the process long before you’re done.

However, clipping your gerbil’s nails isn’t easy. That’s because your pet won’t understand what you’re doing. It may squirm and wriggle in your hands, causing you to drop it, or cut its nails too short.

If you do get a vet to trim your gerbil’s nails, see one that specializes in small animals. A vet may be experienced cutting other larger pet’s nails, but have little experience with gerbils.

Does Clipping a Gerbil’s Claws Work?

The main issue with clipping your pet’s nails is that it can cause your pet stress. Your pet doesn’t understand what you/the vet is doing, or why. All it will know is that it’s being held tightly, which it may not like, and that its nails are being clipped.

Clipping can also hurt your pet. According to Clinical Dermatology, every nail has several parts to it:

If you accidentally cut into the quick, it causes lots of pain. You may have done this yourself, to your own nails, before. It’s easy to do the same to your pet if you aren’t experienced clipping its nails. This can cause more trouble than it solves, because your pet will find it difficult to walk.

4/ Gerbil Toys for Wearing Down Nails

You could allow your pet to deal with its issue independently. This is a more suitable long-term solution to the problem.

You should already have toys for your gerbil’s teeth. These are solid toys, made of a material like wood, which gerbils like to gnaw on. If you have some in your pet’s cage, it may already keep its nails short by scrabbling on the toy.

However, your pet may not want to or have the ability to. So, you should put in some toys that are more suitable. Here are some examples:

If your pet’s enclosure has each of these toys, it can keep its nails short on its own. This is the main advantage of this method. But these toys also let your gerbil keep its claws sharp, which it prefers.

Will Playing with Toys Shorten Your Gerbil’s Claws?

Not all gerbils understand that they can keep their nails short. If they did, then their nails wouldn’t get long in the first place.

The problem is that the things which keep a gerbil’s nails short are all automatic. They aren’t behaviors that your pet decides on doing. Rather, a gerbil will already want to dig burrows. Keeping its nails short is a happy side effect rather than a result of manual behavior.

Your gerbil may not see these toys and decide to keep their nails short. So, you would still have to clip them. But at least once you do, your gerbil will have an easier time keeping them short.

Also, if you provide too many toys, your gerbil could make its nails too short. This could easily happen if you clip its nails and provide it with sandpaper. Short nails can cause similar pain to long ones.