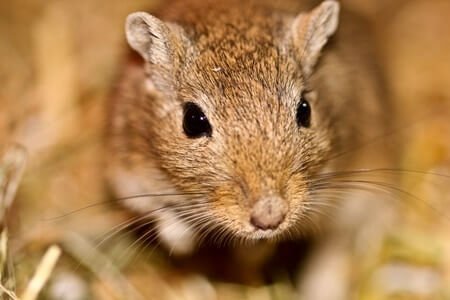 Gerbils are wild animals. In the right environment, your gerbils could live outdoors, but certain caveats apply to keep your pet safe from harm.

Allowing your gerbils to run around freely outside is unsafe. Other pets or predators could eat your gerbil, such as cats or dogs bred for hunting rodents, like schnauzers. If you build a pen or put your gerbil in an exercise ball, it’ll be safe provided that it’s supervised. The most likely scenario is that your gerbil will run away.

A pen is the best option for letting your gerbil play outside because it’s secure yet allows your pet to sniff the air and touch the grass. Even so, you’ll need to supervise your gerbil at all times due to the various risks.

Can Gerbils Play Outside?

Gerbils can play outside, although allowing them to do so can easily go wrong. There are several problems with allowing them out, such as their vulnerability to other animals and their propensity to run away. As such, you can’t let your gerbil outside to do whatever it wants.

The grass may not be safe to play on or eat. It may be treated with pesticides, which aren’t safe to ingest. It could also have mites or fleas left behind by other passing animals.

Is It Safe for Gerbils to Play Outside?

Gerbils aren’t safe when they play outside. They’re small and vulnerable pets that other animals could easily attack. You must ensure that there aren’t any predators around before letting your gerbils out.

Cats, for example, naturally chase rodents like mice and rats. It is in their nature to chase other rodents like gerbils, too. So, if you or your neighbor has a cat or cats, they could attack your gerbil.

Dogs may also attack gerbils. Some species are bred to hunt down rodents, such as rat terriers. These dogs are small enough that they can chase rodents into tight spaces. They’re also big enough to easily overpower a gerbil or any other rodent.

For their part, gerbils are afraid of other pets. Gerbils can encounter wild cats, both large and small. According to the IUCN, they share a habitat with Pallas’ cat, a medium-sized wild cat. So, even if the cat didn’t attack your gerbil, it could still frighten it.

There’s also the possibility that a wild animal could attack your pet. This is much more unlikely but still possible. A fox, for example, would easily attack and kill your pet. Depending on where you live, there could also be other animals like coyotes.

What this means is that your gerbil isn’t safe to be left unsupervised. Gerbils only have limited defensive qualities.

Will Gerbils Run Away If Let Outside?

It’s also possible that your gerbil would want to run away. Gerbils haven’t been domesticated for thousands of years, like dogs.

This means that your gerbil could potentially run away and try to dig a burrow. Gerbils live in burrows in the wild, in groups sometimes numbering more than a dozen. They still retain their affinity for burrowing and living in tunnels.

It’s possible that your gerbil could encounter an existing tunnel and run into it. Or, it may try to make a burrow of its own.

This does depend on where you live. If you live in a city, then it may not encounter any green spaces that it could dig in. But it may want to dig a burrow in your yard/garden.

Either way, this too means that you shouldn’t leave your gerbil unattended. Because once your gerbil hides in its burrow, it will be difficult to find.

How to Let a Gerbil Play Outside

You can’t let your gerbil loose on its own outside. If you do, it could easily go missing or be attacked. Your gerbil could react to any startling noise by running and hiding. You wouldn’t easily get it back.

But that doesn’t mean you can’t let your gerbil outside at all. There are several ways to do so safely, without any risk that your pet will escape.

A pen is a small play area that your pet can run around in. You can build it with a floor or without one, i.e., nothing but walls. You then place the pen on the ground in your yard and let your gerbil scoot around it.

The pen itself can have several forms. It could be a maze, for example, for your gerbil to explore. This will keep it occupied for a while as it learns all the ways in and out. Or, it could be a large open space that your pet runs around in. Both kinds are great fun for your pet.

Pens can be made easily from solid cardboard. You cut the cardboard into high walls of 15 inches or so. Their height and smooth surface will prevent your gerbil from escaping. You then tape or staple the walls together in any configuration you like.

If you do make a pen, make it from heavy materials. The lighter the card, the easier your gerbil could escape. But with thick, heavy packaging cardboard, your gerbil would find it difficult to lift.

What makes pens so great is that you can use them inside or out. Gerbils enjoy exploring outside of their cages, even indoors. So, a pen will make your gerbil a lot happier even if you don’t take it outside frequently.

Put Your Gerbil in an Exercise Ball

You could also consider putting your gerbil in an exercise ball. These are large and hollow plastic balls that your gerbil can sit inside. If it wants to move forward, it can step forward as normal. This rolls the ball forward. The ball has a door and air holes to make it accessible.

Other rodent pets are usually placed in exercise balls to run around, but gerbils can be too.

What makes exercise balls good for exploring is that they provide a level of safety. Even if a predator tried to attack your pet, it would still be safe. While it would be best not to let this happen, having the exercise ball around your gerbil would prevent the other pet from killing it.

Besides that, exercise balls still offer some way of interacting with the outside world. They have air holes so that your gerbil can smell its environment.

Scatter Feed for Your Gerbil

Keep your gerbil occupied while it’s playing outside. Otherwise, it might get curious and want to escape its pen. One way to keep it occupied is with scatter feeding.

You may already do this at home for your pet. Scatter feeding is where you scatter food around the whole of your gerbil’s cage rather than put it in a bowl. The idea is that this allows your pet to scrabble and dig for its food, as it does in the wild.

Doing this in your gerbil’s pen is the same as doing it in your pet’s cage. You sprinkle the food all around the area your pet is allowed to move around.

Observe Your Pet at All Times

Whatever method you use to allow your gerbil playtime, don’t leave it unobserved. Take the pen, for example. Gerbils are constant diggers, so your pet may dig at the walls and floor of the pen. They could easily break through to the other side if you aren’t watching.

Or, take the gerbil exercise ball. Your pet could roll its way across your yard and towards the road outside. Here it would be in danger from passing cars. It would also put the drivers of the cars at risk if they swerved to avoid your pet.

Gerbils are surprisingly fast when they get loose, too. So, your pet could get away from you quickly. They can also squeeze through tiny gaps, like those between or under fence posts.

This may seem inconvenient, but your gerbil doesn’t need to be outside for long. Wild gerbils do spend their time foraging but also spend much of their days in their burrows. So, only a short time outside is required.

Can Gerbils Live Outside?

If you can’t keep your pet anymore, you may be tempted to set it free. Ideally, give your pet to a shelter, but some people do this anyway.

Gerbils can live outside because they’re not fully domesticated. They were only kept as pets/lab animals fifty to a hundred years ago. They haven’t yet lost their instincts.

Wild gerbils live in Mongolia and other places with deserts or dry grasslands. So, they’re good at surviving in inhospitable conditions. But that doesn’t mean your gerbil can live if you set it free.

Can Gerbils Be Kept Outside?

Wild gerbils live in the Mongolian steppe. According to the World Wildlife Fund, this is a dry environment similar to a desert, but with sandy soil and many shrubs and grasses growing there. It’s a unique biome that’s hardly found anywhere else.

Here, they’re uniquely adapted to the environment. They avoid the heat and cold by burrowing into the ground. There are few animals, so few predators. But this likely doesn’t apply to where you live. This means you couldn’t keep it in an outdoor cage or enclosure. There would be:

As such, you have to keep your gerbil indoors.

Can Gerbils Survive Outside Permanently?

A gerbil couldn’t survive permanently if you let it free or lost it. If your gerbil got loose, you would have to find it as soon as possible That’s because it would likely die before too long. Here’s why it would:

Your gerbil could survive for a while. But it would be in constant danger, so if you’re thinking of leaving your pet outside, take it to a shelter instead.

What to Do If a Gerbil Goes Missing

If your gerbil ever escapes, begin by searching for it manually. Look where it last was thoroughly and up close. Figure out what your gerbil was running from or towards. This will help you understand where it’s gone.

However, this likely won’t work. Gerbils are great at hiding. The best thing you can do is lure it back. Leave out some of its favorite foods, and it may come back to have some. You can then catch it when it does return.

In the future, don’t take your gerbil outside again. A gerbil that previously tried to escape will likely try to do so again.