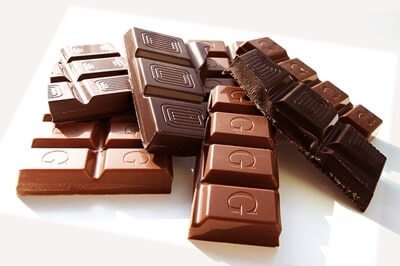 Chocolate is delicious and one of the most popular snack foods. So, you may wonder whether you can feed gerbils chocolate as a treat. Unfortunately, chocolate is poisonous to gerbils.

Gerbils can’t eat chocolate because it contains theobromine, which a gerbil’s body can’t metabolize. Even small amounts of chocolate can lead to seizures, irregular heart rhythm, and even death. White chocolate contains just tiny amounts of theobromine, but it’s high in fat and sugar.

Despite its toxicity, gerbils like chocolate due to its sweet taste. It’s vital to keep all chocolate and chocolate-flavored foods out of your gerbil’s reach. Just feed your gerbil nuts, seeds, or dried fruit as a treat.

Humans have been eating chocolate for millennia. Ancient societies domesticated cocoa beans around 4,000 years ago. To this day, chocolate is still one of the most popular sweet foods eaten as a snack or treat.

Gerbils are omnivores, meaning they can digest both animal and plant-based foodstuffs. Gerbils can eat a range of ‘human foods,’ including fruit, vegetables, seeds, nuts, and small pieces of egg and cheese. But sadly, chocolate is one food that you can’t share with your gerbil.

Chocolate, which is made from roasted and ground cocoa beans, contains a chemical called theobromine. Theobromine isn’t harmful to us, but it’s toxic to gerbils and other animals. Chocolate also contains caffeine, which can be dangerous to small animals, especially if consumed in large amounts.

But do gerbils like chocolate? Although chocolate is poisonous to gerbils, it doesn’t taste bitter or unpleasant to them. It tastes just as sweet and delicious to a gerbil as it does to us. Chocolate is full of fat and sugar and is very high in calories.

Gerbils are compelled to eat high-calorie foods as a survival mechanism. So, gerbils will eat chocolate if given the opportunity. Never give your gerbil chocolate, or leave chocolate within your gerbil’s reach.

Dark chocolate has the highest concentration of theobromine of all chocolate products (aside from pure cocoa powder). It has 8 to 10 times as much theobromine per gram than milk chocolate. The higher the percentage of cocoa, the more dangerous it will be.

To be classified as ‘dark,’ the chocolate must contain at least 70% pure cocoa solids. This means that most types of dark chocolate contain around 7mg of theobromine per gram. This could be a fatally potential amount to a tiny animal like a gerbil.

Dark chocolate also contains a substantial amount of caffeine, which acts as a stimulant. According to Pharmacology, Biochemistry, and Behavior, low doses of caffeine increase wheel-running activity in gerbils. Caffeine also raises the blood pressure and can cause an irregular heartbeat.

Milk chocolate has far less theobromine than dark chocolate by comparison. It has approximately 1.5mg of theobromine per gram of chocolate. However, this is still a high enough concentration to make it unsafe. Even a small piece of milk chocolate, the size of your gerbil’s paw, could make it sick.

Milk chocolate also contains caffeine, although less than dark chocolate. There is around 0.2mg of caffeine per gram of milk chocolate.

As suggested by its name, milk chocolate is made with milk. According to the FDA, it must contain at least 12% milk solids to be labeled as ‘milk chocolate’ in the U.S. This means it also contains lactose, to which most gerbils are intolerant.

White chocolate, recognized by its creamy off-white color, is the least problematic kind of chocolate for gerbils. It lacks any cocoa solids and is made purely from cocoa butter, sugar, and milk.

Cocoa butter, the only part of the cocoa bean used in white chocolate, doesn’t contain theobromine. So, according to Molecules, white chocolate contains only trace amounts of theobromine (less than 0.05mg per gram). It’s also caffeine-free.

This means that white chocolate isn’t poisonous to gerbils. However, it still isn’t healthy. White chocolate is composed almost entirely of fat and sugar and has no nutritional value for gerbils.

So, although white chocolate isn’t toxic, it’s still not suitable food for a gerbil’s diet. Consumption of white chocolate could lead to digestive troubles, tooth rot, and obesity in gerbils. The same goes for any other chocolate-flavored treat, such as chocolate cake, ice cream, and baked goods.

Not to mention, white chocolate also contains at least 14% milk. Most gerbils are lactose intolerant, so it could make them sick. You may notice symptoms such as diarrhea and lethargy.

Why Is Chocolate Bad for Gerbils?

It seems strange that a food we can eat without issue could be so bad for a gerbil. You may wonder: why is chocolate poisonous to gerbils but not humans?

In sufficient quantities, theobromine has a toxic effect on the body. It can cause trembling, sweating, headaches, a fast or irregular heartbeat, and high blood pressure. But a human’s body can metabolize theobromine a lot faster than a gerbil’s body can.

Because of this, we can process the chemical before any harmful effects are felt. But gerbils can’t. They metabolize theobromine so slowly that it can build up in their system. The more they eat, the more damage it does. The same is true of dogs and cats.

Rats and mice appear to be better at processing theobromine than dogs and cats. However, no studies have been conducted on theobromine poisoning in gerbils specifically. We don’t yet know the ‘safe limit,’ so it’s best to avoid feeding gerbils chocolate altogether.

Aside from theobromine, chocolate also contains caffeine, which can also poison a gerbil. It also contains high levels of fat and sugar, which are unhealthy for gerbils in large quantities.

Chocolate has very little nutritional value for gerbils, and even white chocolate (which is non-toxic) can cause problems.

What Happens If Gerbils Eat Chocolate?

Many of the above symptoms are also associated with caffeine poisoning. As chocolate contains caffeine as well as theobromine, the symptoms will be more pronounced.

According to the Journal of Biological Sciences, theobromine can also cause infertility issues in mice, including the risk of miscarriage. While no studies have yet been done on gerbils, there’s a chance it could have a similar effect.

In dogs and other animals, a telltale sign of theobromine poisoning is vomiting. However, according to PLOS One, rodents (including gerbils) cannot vomit. They lack the required neurological structures to do so.

This means that a veterinarian won’t be able to induce vomiting in a gerbil that has been poisoned. If a gerbil has chocolate poisoning, there isn’t much that can be done. Managing the symptoms and waiting for them to pass is the only course of action.

A gerbil won’t get theobromine poisoning from eating white chocolate. However, white chocolate still contains lots of sugar and fat. If a gerbil regularly eats white chocolate, this could lead to obesity, tooth rot, and digestive issues.

Can Gerbils Die from Eating Chocolate?

Gerbils can die from eating chocolate if they consume enough. It all depends on how much theobromine the chocolate contained and how much was ingested.

To measure how deadly a poisonous substance is, scientists use a measurement called the LD50. This refers to the quantity of the toxin that would have a 50/50 chance of killing the animal.

Scientists have not yet tested the LD50 of theobromine in gerbils. However, studies have been done on mice, which are similar to rodents. This gives us some idea of theobromine’s toxicity to gerbils, although we can’t assume it’s the same.

The LD50 for theobromine in mice is around 1,000mg per kg of body weight. So, for a mouse weighing 40g, a deadly dose would be 40mg of theobromine. This is approximately equal to 5-6g of dark chocolate, or 26.6g of milk chocolate.

On average, a typical square of chocolate from a chocolate bar weighs 11g. This means that half a square of dark chocolate, or 2.5 squares of milk chocolate, could kill a mouse. White chocolate doesn’t contain theobromine and poses no danger.

A similar amount could kill a 40g gerbil if their tolerance of theobromine is equal to that of mice. However, it’s possible that gerbils may metabolize theobromine even slower than a mouse would. In that case, a smaller amount may be deadly.

If you are worried that your gerbil may have eaten chocolate, consult a veterinarian straight away. In the meantime, monitor your gerbil and write down any symptoms that you notice.

Can You Get Chocolate Drops for Gerbils?

Some pet food manufacturers make rodent-friendly ‘chocolate drops’ that are safe for our furry friends. Unsurprisingly, these aren’t made of real chocolate. They are a chocolate-flavored alternative that is non-toxic to animals.

You may notice that the package calls them ‘choc drops,’ ‘choccy drops,’ or chocolate-flavored. These are all clues that there’s no real cocoa present in the ingredients. The same goes for ‘chocolate’ drops designed for dogs.

Chocolate drops for rodents are usually made from carob. This is a similar plant to cacao (from which chocolate is made), and it has a chocolate-like flavor. However, carob contains no theobromine and no caffeine.

As well as being non-toxic, rodent chocolate drops are also designed to melt at a higher temperature. This ensures that they don’t soften and create a mess all over your gerbil’s cage.

You can find rodent chocolate drops in the small animal section of some pet stores. They’re normally marketed towards hamsters, but they’re also suitable for gerbils, mice, and rats.

Unfortunately, rodent chocolate drops are still not healthy. Look at the ingredients and you’ll see that they’re mostly oil, sugar, and dairy. They don’t contain any real nutritional value and are just empty calories.

Too many rodent chocolate drops could cause your gerbil to become overweight or obese. Such treats could also negatively affect your gerbil’s digestive system. And because treats are so tasty, your gerbil might prefer them over regular food, leading to nutritional deficiencies.

Avoid giving your gerbil too many treats. If you’d like to give your gerbil a snack, healthier options include seeds, nuts, and pieces of dried fruit. One or two pieces per week would be plenty. Offer treats alongside a varied diet, including dry food, fresh vegetables, and a small amount of fresh fruit.