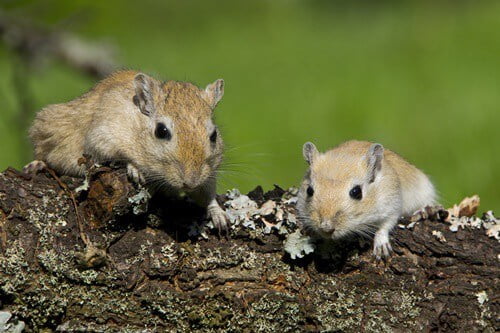 Gerbils live in burrows, both in the wild and in captivity. This means they have to do lots of climbing to survive. But that doesn’t necessarily mean that gerbils are good climbers.

Gerbils can climb if they have handholds. They can’t climb smooth plastic, especially at a completely vertical angle. Gerbils can climb stairs, horizontal tubes, tubes at an angle, and branches. They can climb the bars of their cages and will do so if stressed and unhappy.

You don’t need to provide your gerbil with tubes to climb through. A gerbil will create its own burrow, which it will hide, play, and sleep in. Also, tubes are normally plastic which you shouldn’t put in a gerbil’s enclosure.

Much depends on what you want your gerbil to climb. Gerbils are better climbers than most humans, but they can’t cling to vertical surfaces if they don’t have hand-holds. This rules out most surfaces for vertical climbing, like smooth plastic.

It also depends on the surface they want to climb. Plastic is much harder to climb up than a tree branch at the same angle, for example. If you’ve ever tried to climb the wrong way up a plastic slide, you’ll know that you quickly slide down again. It’s the same for gerbils.

However, gerbils need interesting cages. If your pet’s cage is dull and boring, your pet will get antsy and unhappy. Providing branches and furniture that your pet can climb and sit on provides excitement.

Gerbils cannot climb smooth vertical tubes. Only animals that have specially designed feet can do so. Some reptiles have feet that create a vacuum between the foot and the surface. Other animals have sticky feet, which can stick to anything.

However, unlike many other animals designed for climbing, gerbils have lots of fur on their paws. This fur covers the tops of their paws but also appears on the underside.

This means they’re nowhere near strong enough grip-wise to hold onto a vertical slide. It would be like trying to drag yourself up a vertical slide using only the palms of your hands. Your body weight is too much for the grip of your palms to hold up.

Gerbils can climb vertical tubes that have places to grip, though. If the tube isn’t perfectly smooth, this offers a small amount of grip. Better yet are solid hand-holds, e.g., the small overlap between two tubes where they connect. If the tube is at a slight angle, this would be fine for climbing.

Gerbils are definitely clever enough to figure out how to use stairs. If there’s some incentive at the top, the gerbil will climb the stairs to reach it. It will hop from one step to the next.

Gerbils can climb stairs much easier than they can climb in vertical plastic tubes. That’s because the stairs offer platforms at each level that the gerbil can rest on. Vertical tubes don’t have that. Instead, the gerbil needs momentum and grip to move upwards.

A gerbil may not bother climbing stairs if there isn’t an incentive for it to do so.

The easiest way to make a set of stairs for your gerbil’s pen is with a series of books. Place the books one on top of the other, with room on each step for your pet. If you do this, don’t place the books at such an angle that they could fall. Otherwise, they might hurt your pet.

According to the Royal Society, rodents like rats climb trees. Trees and branches are easy for a gerbil to climb. They offer exactly what plastic tubes don’t: lots of hand-holds. Your gerbil can use these hand and foot-holds to climb upwards easily.

That’s because the surface of a tree or branch is usually rough bark. Rough bark often has gouges and gaps half an inch deep, which gives your gerbil something good to hold on to.

Also, branches and trees aren’t normally at a perfect vertical angle. Even a slight angle of ten or twenty degrees allows for much easier climbing than a sheer vertical face.

However, if a gerbil escaped, it wouldn’t climb a tree. Gerbils don’t have trees in the wild where they live. They don’t have any tree-climbing instinct.

Where this is relevant is in your gerbil’s cage. You can put wooden toys or branches in your gerbil’s enclosure if you like. Your gerbil can climb them to reach a certain part of the cage if the branch is wide enough and easy to walk across.

Can Gerbils Climb Out of Their Cages?

A big issue with many different pets is that they try to escape. Pets in cages can get bored and unhappy. When this happens, the pet will want to get out to explore and do something more fun.

Gerbils, too, can get bored. When they do, they’ll display escape behaviors like jumping up at the side of the cage and scrabbling on the floor. But as for whether they can escape their cages entirely, that’s another matter.

Many rodents can climb the bars of their cages. They do if they’re bored or to try and escape from their enclosures. They use the cage bars like rungs to climb upwards. This is, in a sense, climbing vertically.

Not all gerbils are known to do this. They don’t have the same instinct as other rodents do.

Take mice and rats as a comparative example. These animals live in places in the wild that require climbing. Tree trunks and branches, rock formations, and human structures are all common where mice and rats live.

This gives rats and mice the instinct required to climb bars. That’s not the case for gerbils. Gerbils don’t live in a place that has trees and big rock formations that they could climb. Instead, gerbils live in burrows in the ground. They don’t stray far from their homes.

That being said, it’s not unheard of for a gerbil to climb the bars of its cage. According to Behavioral Brain Research, climbing ladders (which is similar) have been seen in experiments.

Climbing is not usually a good sign. It means your pet is trying to escape. That could be because:

You may also notice your pet scrabbling at the glass of its tank to get out. If you see these signs, note them, and figure out why your gerbil is unhappy.

Some pets, especially reptiles, can climb the glass of their tanks. They may do so and then sit, perched and relaxed, looking out. They can do this because they have special pads on their feet that act like suction cups.

Gerbils’ feet don’t have this feature. They have lots of hair around their feet, which breaks any grip they may have. The most a gerbil will do is jump up at the glass of its cage. A gerbil can’t climb up the glass.

Gerbils usually like to climb. Climbing and running through tunnels is basic gerbil behavior. Both in the wild and in captivity, they live in burrows. They have an instinctual desire to run through tunnels.

What gerbils don’t think to do is climb vertical surfaces like trees and walls. Gerbils don’t typically like to climb these. In the wild, gerbils live in the Mongolian steppe. There are no trees or walls there to climb: it’s like a grassy desert.

Here, there isn’t anything for gerbils to climb up. The only climbing a gerbil does in this environment is in and out of its burrow. And in the burrow, there are never any completely vertical tunnels. The surface of the burrow, soil, is easy to get purchase on too.

Also, not all gerbils love to climb and run through tunnels. All gerbils have their own personalities. Some are lazier than others, and you can’t coax them to do what they don’t want to do.

If your gerbil won’t climb its tube, the issue may be the placement. The tube may be in an awkward position for your gerbils to climb into. If your gerbil has to jump to reach it, for example, it might be slightly too far away.

The same applies to the ladder that leads between the lower and upper halves of your pet’s gerbilarium. It may be difficult for your pet to climb.

Another reason is that the tube may not be exciting enough. If it doesn’t go anywhere, your gerbil may not feel the need to run through it. The same applies to you: do you have any reason to run to the end of your yard right now? If not, you probably won’t do it.

Your gerbil may also be preoccupied with its own tunnels. All gerbils live in burrows and dig them in captivity. This burrow may be satisfying your gerbil’s needs.

Should You Give Gerbils Tubes to Climb?

Most people who own small pets will buy tubes for their pets to climb in. These tubes, usually plastic, run around the cage and give your pet something to do. They also satisfy your pet’s urge to run around in burrows. However, giving your pet ready-made tubes isn’t a good idea. Here’s why.

Gerbils Prefer Their Own Burrows

In the wild, gerbils dig their own burrows. Their whole lives revolve around these homes. A gerbil will live in a burrow with its partner, raise its family in there, hide from predators there, and won’t move far away from it when foraging for food.

These burrows are dark and made from natural materials (in the wild, soil). In captivity, your pet will make its own tunnels out of bedding and spit. They will do this continually, even after you change their bedding for fresh.

They don’t enjoy running through pre-made tunnels as much as the ones they make. If your gerbil isn’t allowed to dig its own tunnels, it becomes stressed. According to Alternatives to Laboratory Animals, this is shown through stereotypical digging behaviors even on surfaces that can’t be dug.

Tubes Are Made of Plastic

There shouldn’t be any plastic in your gerbil’s cage, no matter what it’s there for. It doesn’t matter if you buy it a running wheel, a tube, a feeding bowl, or a toy: nothing plastic should be in there.

That’s because gerbils will chew through plastic with ease. Gerbils continually chew on things to keep their teeth from overgrowing. Any solid material like wood or plastic will get gnawed. Wood isn’t tasty but won’t do your pet any harm.

Plastic, on the other hand, is bad for your pet. Because plastic is indigestible, when your gerbil accidentally eats any, it can cause bad digestive problems. Let your gerbil make its own tunnels.